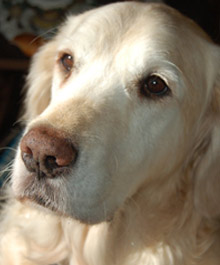 Woof! My name is Apollo, but Joy seems to call me ‘No Bark Apollo” a lot because I like to bark at everything I see. I was taken off the streets of Istanbul, Turkey, kept in a shelter for many months because airplanes couldn’t fly me to the United States because of something called COVID-19. I was picked up at JFK airport by some nice people who drove me north to Massachusetts and the Yankee Golden Retriever Rescue shelter.

Soon after I arrived a nice lady who was grooming me said “Have you thought about this dog for Joy?” It seems Joy had a Yankee Golden from Turkey and was looking for another. I turned on my charm and Joy took me home, gave me treats, a nice bed, a fenced yard, walks and she let me sleep on her bed at night! I like to cuddle.

My reward is to serve as the neighborhood sentry, I bark when someone walks down our street, when someone passes through the adjoining woods, when that turkey bird comes to feed on the corn Joy puts out, when the deer herd passes through and sometimes just for the heck of it. I also have been known to make an announcement when a leaf falls off a tree. As we live in the woods, that happens often. Joy doesn’t seem to think that’s an occurrence worthy of note, but I think otherwise.

There’s another dog living here too. She’ s a Black Lab mix Joy took in when her owner died. Joy calls her a stomach on four legs because she eats anything that hits the floor. Sometimes that includes my treats because she is so fast to snatch them up. I’m a much more refined eater and Joy says I have the gentlest mouth she’s ever known. Speaking of my mouth, I’m told I’m going to see a Doggie Dentist soon and have several teeth and roots pulled out. I don’t think I like the sounds of that, but I’ll tell you about it on my next posting. Until then, be good to your dog. –Apollo Viola