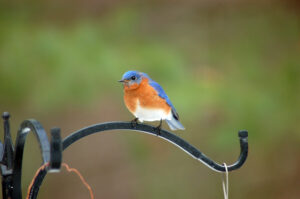 When I was 5 years old, I remember watching the family of Bluebirds that came to our bird bath every evening for their communal bath. It was the genesis of my becoming a life-long birder. My first “official checklist” is dated 1944 from the Minneapolis Audubon Society. I once met the famous Roger Tory Peterson and told him of my early birding adventures and he smilingly said, “My, you were precocious.” Since those early day, my Birder’s Life List has grown to over 2300 species, duly recorded, around the globe and on every continent.

Alfred and I were meticulous about our individual Life Lists. If one of us was present, but didn’t see the bird, we were honest about it even though we were sometimes a wee bit competitive as birders sometimes want to be. His Life List was more than mine because he took a trip to India and one to Mexico that I did not.

At the onset of Cornell University’s Project Feeder Watch in 1986, we signed up to monitor our feeders two consecutive days each weekend recording the number of individual species and the number of individual birds within each species. We’d also record temperatures, snow cover, and number of hours spent observing. I must confess we’d often hope for a snowstorm during the winter weekends because that always made our tally go higher! On one occasion we had 82 Goldfinches feeding on thistle seed I had scattered on top of a large snow bank. I still participate more than three decades later.

We also participated in the Annual Audubon Christmas Bird Count covering our assigned territory on cold January days. I’m not sure what year we began that venture, but my records go back fifteen years.

Alfred used to always tell people birding was a hobby you could enjoy anywhere. All you needed was a field guide to the region and a pair of binoculars. He should have also said a lot of patience and due diligence to learn a bit about birding identification as well. In my book, I tell how I introduced my husband to birding and he became the only person I ever knew who would take a field guide into the bathroom and study it while engaging in his “business.”

Wayne Peterson, a birder’s birder of Massachusetts Audubon Society fame still tells the story of the day our field guide dropped out of Alfred’s pocket and down into the chemical toilet at the Cape Cod Museum of Natural History one early birding morning. Al came outside, looked at me sheepishly and told me what had happened. “Well get it out, I yelled, it’s got our Life List in it!” Fortunately, the toilet had been cleaned the night before and the book was restored without damage, but we never heard the end of that story. And Wayne obviously shared it because I’ve had people say, “Oh, YOU’re the ones!”

Birders are like that, you see. On our first camping trip west, we got bored with the interstate highways and decided to drive secondary roads in a stretch of Nebraska where one could see ten miles in each direction. We came upon a prairie pot hole and excitedly noted a number of birds feeding there. One was an Avocet, a new “lifer” for us at the time. We both jumped out of the car and Al headed off toward the pond with his camera, which he carried mounted on a gunstock. Before long a Police car pulled up behind us and the officer got out and inquired if everything was all right. “Oh yes,” I enthusiastically replied, “There’s an Avocet out there!” He gave me a look that clearly said, “Oh brother, one of those” but then politely replied “Well, would you mind moving the car out of the middle of the road?”

Stories of our birding adventures and misadventures are scattered throughout the book except for the chapters on my professional trips to China and Saudi Arabia where, at the time, I might have been viewed suspiciously were I to pull out a pair of binoculars and start scanning the landscape.

At Alfred’s retirement party, a math professor, who had been on the tour we led to Australia, remarked that “traveling with the Viola’s was a unique experience and one during which you never knew where you might be taken. While in Alice Springs, most of our group went to visit the Flying Doctor headquarters, but Joy and Alfred took a group to the Alice Springs sewer works one morning where they gleefully came back excited about seeing 27 species of birds.”

There are many birding stories scattered throughout the book. Look for them, (when the book gets published) and maybe you too will become a bird brain like me.