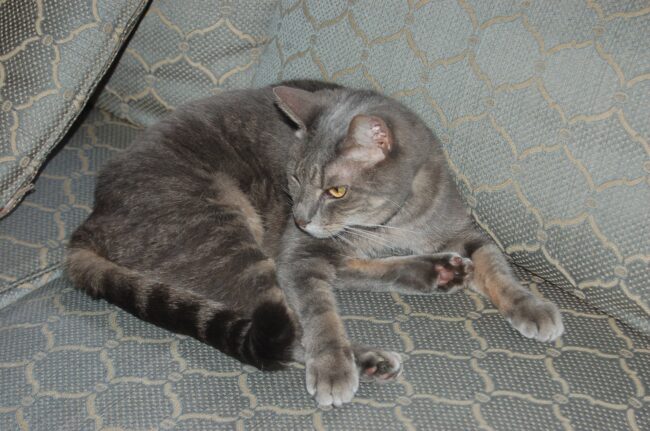 There is a new member in the Viola Household. She’s a young Russian Blue mix kitty and Apollo and Anna are both curious and somewhat intimidated by this 8-pound little creature.

As both Apollo and Anna are affectionate at times, neither is a cuddler and for the past couple of months I’d been thinking how nice it would be to have a kitty sitting on my lap purring and cuddling. Well, Saturday night I brought home “Teresa” from a car shelter, after going to see “Miss Happy Birthday” who bit me 5 times in between her purrs and then attacked “Teresa” when she came over to say hello to me! Not the cat for me! Both cats were among 40 cats removed from a house when the owner died. Several shelters stepped up to take the cats, and five went to the Pat Brody Shelter which I found during my searching on-line. The next day, actually at 4 a.m., I couldn’t sleep so I got up, went on-line and started looking for Russian girl’s names. Hence Mishka! – with my own spelling.

It’s been an interesting three days – especially the first 36 hours. I decided Al’s former study would be a good “kitty house” initially so I could keep the cat and dogs apart and introduce them slowly. I also was told to introduce Mishka to the house slowly – one room at a time, so for the first two days I had a series of revolving doors between dogs and the cat with time set aside for all three individually. In order to share the adventure with my family, I kept track of the day’s schedule:

Get up, let dogs out, feed dogs.

Go upstairs, ask Mishka how she slept, feed her and clean litter box.

Go back upstairs and play with Mishka and clean the litter box again.

Bring Mishka downstairs and out to the sun room so she can start to learn about her new home. Keep dogs on the other side of the glass door so they can see but not touch.

Spend the next 1 ½ hours trying to assemble the cat tower parts – unsuccessfully even though every part was numbered. (Where’s Al !! I’m not mechanically inclined and the tower is still assembled unsteadily and incorrectly with parts and screws left over)

Watch the first half of the Patriots game with the dogs.

Give the dogs their kongs and put them in two separate rooms so Anna doesn’t steal Apollo’s and bring Mishka down to the living room to watch the second half of the Patriots game.

After the game, switch to the Red Sox playoff game, take Mishka back to her room, put batteries in a little radio so she has some music, and then go let the dogs out.

Feed the dogs, the cat, and me (a hamburger.)

See also  Not a Wedding but Close to it!

Watched “The Equalizer” on TV then let the dogs out for the last time and go into Mishka’s room to spend a little time with her.

Yesterday went a little more smoothly, having it now down to a routine – put dogs away, introduce Mishka to a new room, bring dogs back out, take one dog into bedroom with Mishka for one-on-one introductions. Walk dogs. Feed everyone, clean the litter box, give everyone treats

Today is day three and we’ve made great progress. Mishka likes Anna, it seems – no hissing – and although she walks around her. Mishka seems unafraid, but Anna is still somewhat intimidated. Apollo remains curious and has now decided he wants Mom to cuddle, rub his tummy at least twice a day and tell her he’s happy to cuddle, he loves her – why did she get a cat!

Lunch was peaceful. The dogs sat and stared at my sandwich, per usual, Mishka walked past both of them, assumed a comfortable position on the sofa and proceeded to go to sleep. Both dogs decided to do likewise once Mom was though eating, so I read the newspaper and the three critters slept in co-habitation peacefully! Stayed tuned…